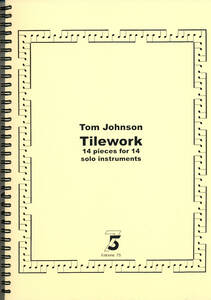 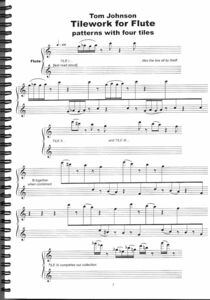 A collection of compositions in which individual tiles/rhythms fit together into musical sequences without simultaneities, often filling all the available points of a line or a loop. 14 different solo pieces are available, written for flute, oboe, clarinet, saxophone, horn, trumpet, trombone, tuba, percussion, violin, viola, cello and double bass. (Tilework pieces also exist for piano and string quartet; these are not included in this anthology.)

“Tilework” has to do with fitting together little tiles to fill lines and loops. One can think of this as making mosaics in one dimension, but it is also very much like stringing beads onto necklaces in various patterns. In musical terms, the Tilework series is a collection of compositions in which individual tiles/rhythms fit together into musical sequences without simultaneities, often filling all the available points of a line or a loop.

Since the notes of different motifs come at different moments, it is possible for a single melodic instrument to play several voices at once, so “tiling” was particularly appropriate for unaccompanied melodic instruments. I gradually found so many ways of tiling musical phrases that I could not stop until I had a piece for each instrument of the orchestra. The year of 2002 was devoted almost exclusively to 14 pieces for 14 solo wind and string instruments. Tilework for Five Conductors and One Drummer, Tilework for Piano, and Tilework for String Quartet came later, in 2003.

At first, interlocking one tile with another seemed obvious, sort of like fitting together the pieces of a jigsaw puzzle. As the work went on, however, it became clear that this was not so simple. Sometimes it is not at all obvious how rhythms/tiles link together, and sometimes one can easily see six ways of solving a certain problem, without being sure if some seventh solution might also be possible, and sometimes the discussion can go way beyond the comprehension of musicians. I knew that making a loop of 16 beats by repeating one eight-note rhythm had something to do with group theory, and I was dimly aware that some mathematicians know how to determine the number of unique necklaces of length n possible using beads of m colors, never allowing two beads of the same color to touch, but I certainly hadn’t studied such things. Gradually I was entering a world I didn’t know much about.

As the Tilework project continued, I sometimes stumbled across questions that were as new and interesting for mathematicians as for myself. I owe much to the regular meetings devoted to Mathematical Music Theory at IRCAM in Paris, where I met many mathematicians, particularly Emmanuel Amiot, and Andranik Tangian, who gave me solutions to some problems. In the case of Tilework for String Quartet, which involves ways of tiling the line with six-note rhythms, I am particularly indebted to Harald Fripertinger and his most useful computer list of “rhythmic canons.” But of course, composers, interpreters, and listeners do not need to know all this, just as we do not need to master counterpoint in order to appreciate a Bach fugue. As always, one of the wonderful things about music is that it allows us to perceive directly things that we would never understand intellectually.

A composition/installation made of five pendulums. See detailed description.

Inhaling and exhaling quite deliberately as one plays a growing melody. Basically a flute piece, though other wind instruments are welcome to try it. Duration 7-11 minutes. Download the score free of charge; paper copies are also available for 5€.

Kientzy Loops was written for the saxophonist Daniel Kientzy, who premiered it, with Reina Portuondo, at the ADAC in Paris on November 21, 2000, as part of a Meta Duo concert. In January 2001 the piece received the prize as the contemporary music premier for the year 2000 in the annual Victoires de la Musique Classique et du Jazz in Nantes.

The piece requires an accompanying recorded loop (which performers prepare however they like), and from beginning to end, the music turns around on this loop of eight notes: G F E D E F G D. This little melody is not as innocent as it looks, however, because it is “self-replicating,” which means that as it turns, the listener can also hear the same melody turning three times or five times slower than the basic melody. The cross-rhythms are brought out in different ways by the performer, who often needs to count in several tempos at once. 10 minutes, 12€. 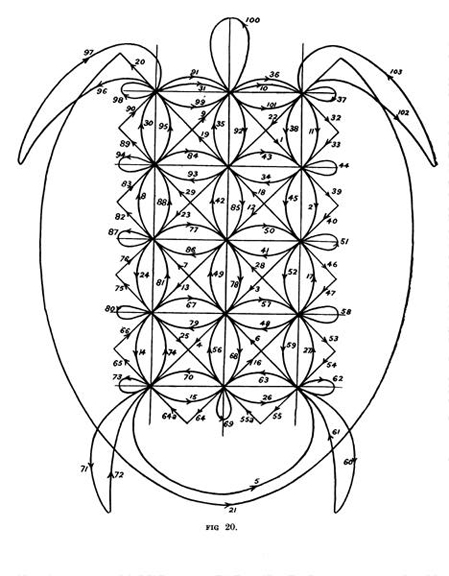 A solo piece written for Daniel Kientzy’s contrabass saxophone, but perhaps playable by other heavy bass instruments. The music follows exactly the portrait of a sea turtle, as drawn by natives of Vanuatu. 4 pages, 5€.

Ten short pieces for flute or clarinet. In each piece the same phrase is played seven times. Six times there is a mistake, and once it is correct. Can you hear the mistakes? Do you prefer the correct or the incorrect phrases? 10€.

A very long, fast melody, playable on any instrument. This 1994 score, originally a radio programme, was properly edited in 2016 with help from Dante Boon and Javier Ruiz. 20 pages, 12€.

A rather difficult solo for trombone. Six minutes, 8€.

Any instrument may play these logical sequences, which become longer and longer, to infinity. 7€.

Available in a version by Daniel Kientzy. 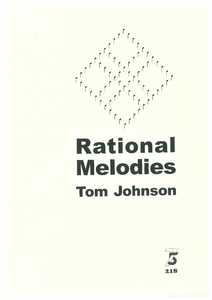 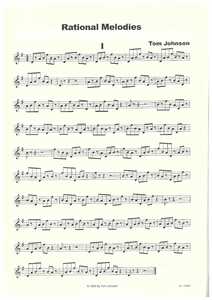 21 systematic melodies for any melodic instrument(s). No. XV is the first “self-replicating” melody, and several other techniques, explained later in the book Self-Similar Melodies, were first used here. 18€.

The original recording by Eberhard Blum is now out of print, but there are two new recordings by Dedalus Ensemble in New World Records and Roger Heaton in Ants Records. 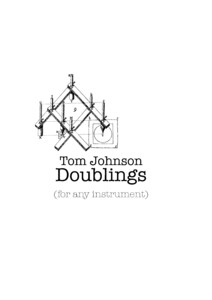 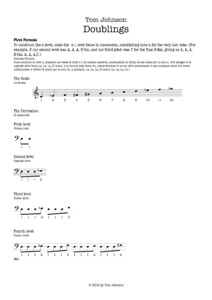 Six ways of transforming a melody of two notes into a melody of four notes, eight notes, 16 notes, 32 notes, etc. until you have a piece as long as you like. A rather formidable concentration exercise, which can also make an unusual recital piece. Doublings was expanded and newly edited in 2018 for flexible instrumentation; it was originally known as Doublings for Double Bass. 8€.

The music is on 12 music stands, and the viola soloist makes the rounds, playing all the fragments in 6-8 minutes.

Originally preceded by three previous pieces, that were ultimately destroyed. 10€. 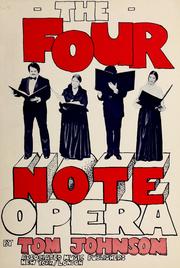